September 2010 – According to recent studies  by the International Telecommunications Union, only 10.9 percent of Africa’s population uses the Internet. By contrast, the Internet is used by 77.4 percent of North Americans. Though there are drastic population gaps — the latest census reports estimate the African population at just over 1 billion, while North America’s is around a third of that — Internet access in Africa is extremely expensive and very difficult to find.

But new help is on the way. Newly laid cables along the West African coastline are slated to bring reliability and improved communications to one of the world’s poorest areas. The cables will also lower Internet prices, drawing more consumers.

“It’s the first of a new wave of investment that the U.N.’s International Telecommunications Union says will vastly raise the bandwidth available in West Africa by mid-2012,” the Associated Press reported last week. The hope is in another decade, Africa will be at the top of the charts for penetration.

END_OF_DOCUMENT_TOKEN_TO_BE_REPLACED

Is Africa prepared for broadband? 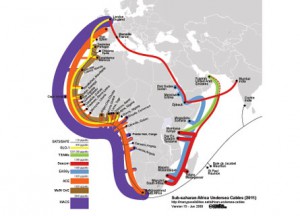 Mobile growth has shaped the past ten years, but broadband will shape the next ten years.    An ITU Human Capacity Development Forum for Africa held in Kampala on July 8-10, 2009 addressed Africa’s readiness for broadband.

Clive Shepherd, an expert in human resource development, says the ICT sector in Africa is in a unique position.  “The biggest obstacle,” he says, “is no longer technology, but the willingness to take advantage of new opportunities and technologies.  And it’s a very exciting position to be in.”

END_OF_DOCUMENT_TOKEN_TO_BE_REPLACED

Blackberry has announced its answer to Apple’s iPad with a device called the Playbook.

The company unveiled its tablet computer to much anticipation at its developer conference, Devcon, in San Francisco. It is one of the first business-centric devices in the tablet market. Analysts said that the release was a clever move by the Blackberry maker Research In Motion whose smartphones dominate the business sector.

“This is one of the most exciting times in our history,” said Mike Lazaridis, RIM chief executive officer.

END_OF_DOCUMENT_TOKEN_TO_BE_REPLACED

Pan-African private equity firm Helios Investment Partners has announced that it is actively looking to increase its presence in Kenya by entering the country’s telecoms sector. The news coincides with reports that Helios has raised USD900 million from investors in order to target new investments. Thus far, Helios’ involvement within Africa’s telecoms sector has been limited to the establishment of Helios Towers Africa, which builds and operates tower businesses across Africa, and the acquisitions of tower portfolios in Ghana, Tanzania and the Democratic Republic of Congo.

END_OF_DOCUMENT_TOKEN_TO_BE_REPLACED

On June 26, the lead opposition Kulmiye party (Kulmiye means “bringing together”) received almost half of the more than 538,000 votes cast, while the ruling UDUB party (United People’s Democratic Party) won 33 percent of votes. Another opposition party, UCID (the Justice and Welfare party), received 17 percent of the votes.